The markets are contending with many significant issues that have led to increased volatility. The primary issue is the U.S.-China trade war and associated slowing of the European, Japanese and Chinese economies along with decreased U.S. manufacturing and business investment. The Trump administration is challenging the mercantilist and protectionist trade practices which have turbo-charged China’s ascension to the world’s second largest economy. China is not only the largest engine of global growth, it has also become highly intertwined within global logistics and trading networks. Irrespective of one’s view of the merits of confronting China’s trade practices or the methods used, the tension and uncertainty are depressing economic activity, especially in the more cyclical corners of the global economy.

As a result of the trade war and developments addressed below, the economic and financial risks have increased over the past year. The President is running a high-risk strategy, hoping that he can renegotiate the US – Chinese trading relationship without tilting the global economy into recession. While we believe both parties likely need to experience more economic pain before a deal can be reached, we also think it may be premature to conclude that the long economic expansion and bull market will soon end.

Concerns
Overseas Weakness
As global trade slows, manufacturing and export-led economies are the first to feel the pain. Germany, which accounts for the same share of world exports as the U.S. despite having only a quarter of the population, may have entered a recession this past quarter. Meanwhile another export economy, Japan, has been mired in a stagnant growth environment for three decades, yet its government plans to raise its value-added tax in October. Consumer confidence and spending are therefore falling (Chart 1). Lastly, China’s economy has been slowing. Although the country’s leadership is providing stimulus, it isn’t acting as aggressively in confronting deceleration as it has in the past. The Hong Kong mass protests add to China’s risks. Evercore ISI’s survey of companies’ sales to Europe and China illustrate the slowdown taking place in both markets (Chart 2). The OECD’s global Leading Economic Indicator (LEI) declined in July, and is now weaker than it has been at any time in almost 10 years (Chart 3). 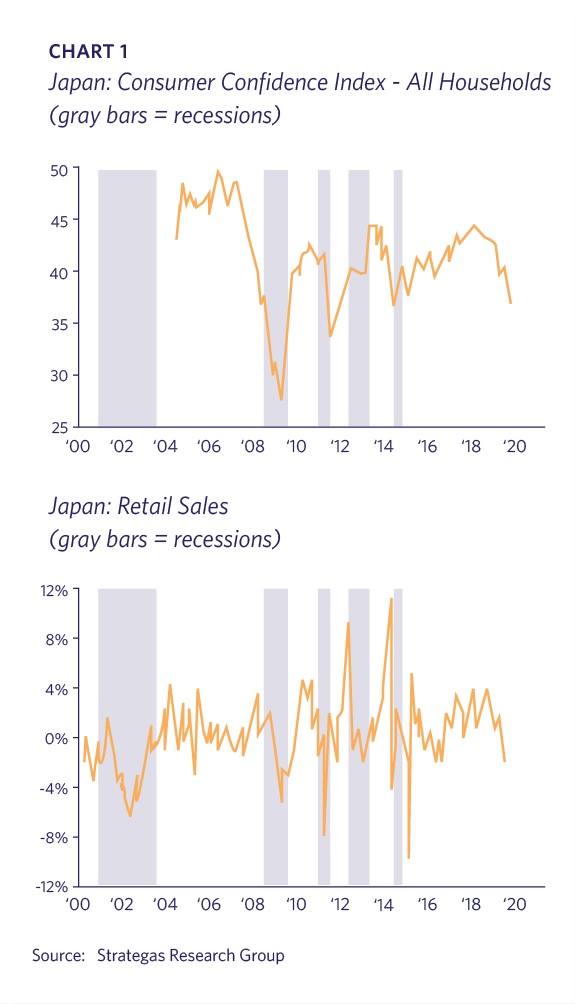 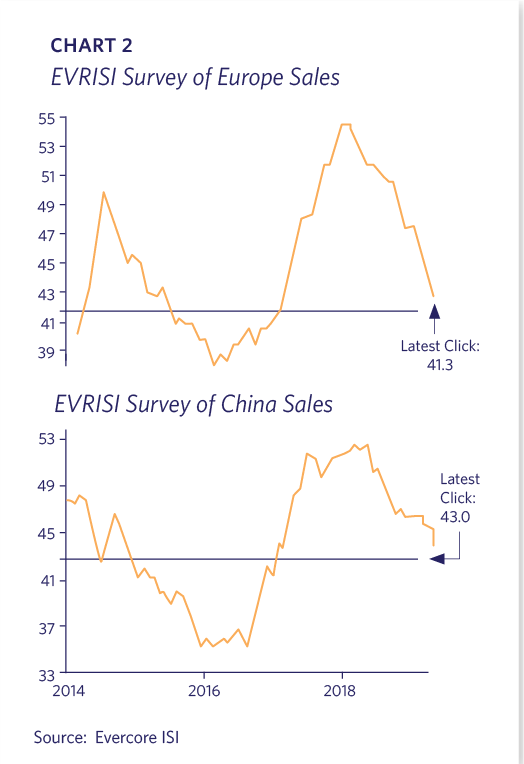 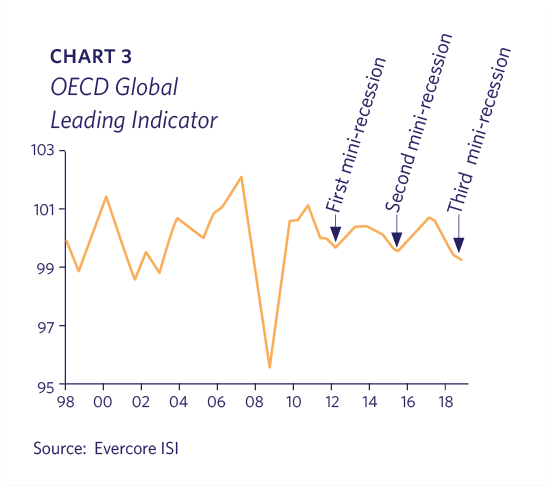 Slowing U.S. Manufacturing and Business Investment
It is likely that President Trump doesn’t fully appreciate how overseas economic weakness feeds back into the U.S. economy. Trade related industries, such as manufacturing, transportation and agriculture, have shown clear deterioration in recent months as the trade war has heated up and the global economy has slowed. The 2017 Tax Reform bill provided substantial incentives for capital expenditures, but this potential stimulus is being negated by the high level of uncertainty. Lower business investment will result in reduced future productivity and economic growth.

Interest Rates Falling
The European and Japanese economies have had emergency-era monetary policies for a decade as they’ve struggled since the Global Financial Crisis (“GFC”). Specifically, the European Central Bank (“ECB”) and Bank of Japan (“BOJ”) have introduced the novel concept of negative interest rates in which the investor locks in a guaranteed loss if held to maturity! Despite no evidence that these policies are achieving a benefit, the ECB doubled down by lowering its deposit rates from (0.40%) to (0.50%) in September. The Swiss deposit rate is already at (0.75%). The growing recession fears and threat of rates plumbing even more negative levels has caused bonds to rally and yields to fall throughout the curve. The amount of global negative-yielding debt jumped from June’s $12 trillion to over $17 trillion by late August 2019. It is fair to ask why, if negative interest rates have thus far failed to stimulate these overseas markets, will more of the same medicine result in a better outcome?